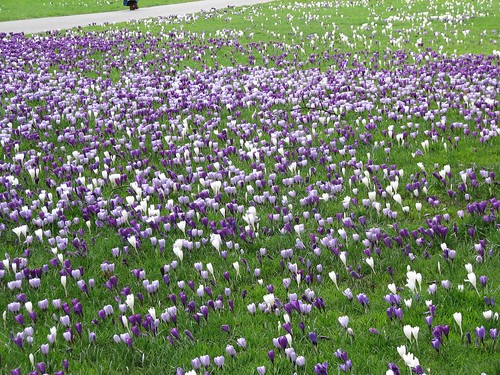 But which is better? Seal, or a seal? There's only one way etc.


So, two places I've been to this week that I hadn't been to before.

1 - Kew Gardens. Kew Gardens is ace, isn't it? We were
there for about four hours on Monday afternoon, and we saw maybe a third of
it. Understandably, there's not much doing outside at this time of the year
- though the Japanse bit's good, with the pagoda and the Japanese gateway
and the Japanese landscaped garden - but there's plenty to see in the
various glasshouses. There was one with orchids in, and one with temperate
trees, and one rainforesty one, and an evolution house that showed how
plants have evolved. They had tanks of fish in some of them, and a poison
dart tree frog, and a 3-D movie where you could swim with plankton. Being
full of trees and plants, there were loads of birds around too. So yes, go
to Kew Gardens. It made me want to garden, even though I don't have a
garden to garden in. I might plant some things in pots though. Sunflowers,
certainly. I like sunflowers.

2 - Reading. Reading isn't as good as Kew Gardens. I went
to the football there on Tuesday evening, and so that I could pay £13
instead of £28 on the train, I had to catch a train from London before 4
pm. Is it me, or are peak hours getting longer. How long will it be before
they abolish the distinction to 'simplify it' and charge peak prices all
the time, like they did with SuperSavers? This all meant that I had to kill
a few hours in Reading, and I more or less managed. It has the usual shops
and stuff, and at least it has a Wagamama's so I was able to get some food.

Now I'd like it to be hometime please.
Collapse